Feel free to log in, register, or just browse around and see what we're all about here at MxB Forum.

If you got help here, REGISTER and help the next guy!

If that's not enough motivation, the ads will go away when you are logged in!

If that doesn't do it for you - registering will allow you to search the forum!

Ride safe and have fun!

So today I decommissioned my bicycle engine.
It's been neglected for too long, spent some time out in the elements gathering rust and storing water where it shouldn't.  In my unsuccessful attempt to bring it back to life this week, I started with preparing the bicycle so it is functional again (needed a new tube).  Next, I broke a rusted screw head off trying to get into the magneto to find that it was coated in some nice looking rust.  After that, I took the clutch cover off and had to tap on the clutch plate with a hammer while applying pressure to the drive system to unlock the rust there.  Finally, I took the jug off to examine the cylinder and rusty brown water poured out of the bottom end.  It's done.

So, on to the next build!!
I still have a CNS Carb and an expansion pipe exhaust that I'd like to use on the next engine if possible, but I've heard rumors of four stroke engines that last a long time and something about a V-twin 2-stroke that kinda excites me.  I'm a poor kid fresh out of college with mountains of student loan debt so I'm not looking to spend much more than $250 if I even spend that much.  I think the first motorized bicycle I built and sold had an angled spark plug and it seemed to have much more low end power than the one I just decommissioned.  Might attempt to go that route again.

Thanks for reading and please post comments, questions and suggestions!

Here are some pictures of the last build:
apparently i'm not allowed to post pictures, says max size per file is 0 mb... 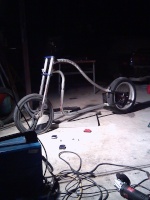